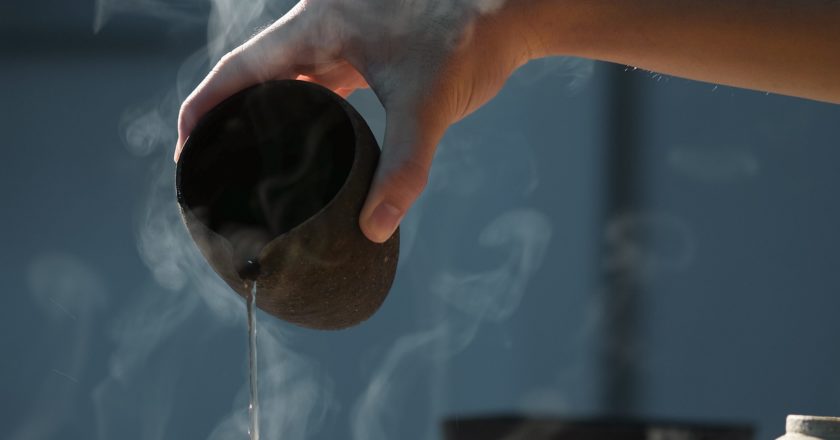 Based on observations of the natural world, ancient Chinese people recognized continuous patterns of transformation and change in the universe. Initially, these observations were interpreted using the Yin-Yang logic, but later these interpretations were expanded using a new theory called the “Wu Xing“. Wu Xing, also known as the Five Elements, is a conceptual scheme that many traditional Chinese fields used to explain and describe interactions and relationships between phenomena and grouping objects, from cosmic cycles to the interaction between internal organs, and from the succession of political regimes to the properties of medicinal drugs….the categories are limitless. The Five Elements reflect a deep understanding of natural law, the Universal order underlying all things in our world.

The theory assets substances can be divide into one of five basic elements: Wood (木 mù), Fire (火 huǒ), Earth (土 tǔ), Metal (金 jīn), and Water(水 shuǐ), which contain their own specific characteristics and properties.

So what does the Five Element theory say to us about the world we live in? First, it speaks about how all things are connected. Everything within each element is related. Let’s take the Water element as an example: when it is winter there is a cold essence, it relates to and impacts in some way the kidneys, the emotion fear is linked, though not always in an obvious, visible way.

Second, the Five Elements show us how the structures and systems in our bodies are connected to each other, how we are linked to our environment and the natural world, how our world is part of the greater universe. Many people today have lost this deep connection to nature and no longer are able to feel this truth resonate in their being.

These elements are five fundamental energies in nature in motion. There is a dynamism between them, they are not static. Within their structure there are two fundamental relationships: generation (the external circle) and overcoming (the internal arrows). Without the balancing nature of these two relationships, things would fall out of order in a flash:

The Five Elements are aspects of Qi. Also health is the result of a harmonious balance of all of them. The Qi of the elements waxes and wanes in daily and seasonal cycles. Each one of us is an unique and characteristic blend of the influences of all the elements.

People who have a strong energy of the Wood element have a clear vision and goals, and know how to bring them into being. They excel at planning and decision making and can be forceful in disagreements. When the Wood Qi is weak, people can be indecisive, without strong direction in life and stuck. When the Liver Qi is congested or stagnant, people can be arrogant, over controlling, and have angry disposition and digestive problems. They may have a tendency to be workaholics or have addictive personalities, including the possibility of abusing drugs and alcohol. When Liver Qi is imbalanced, sour and bitter flavours are said to benefit its meridian, while acid food the opposite. Common illnesses include migraines, eye and sinus problems. For women, menstrual problems are frequent.

People with strong Fire energy may be quite charismatic, excelling at comanding others to action. They may love talking and socializing. When the Fire Qi is weak, a person may be lackluster or bland. They may suffer from anxiety, restlessness and insomnia, be too excitable, easily stimulated to excess, or they may be emotionally cold and unfeeling. Common diseases include palpitation, high blood pressure, heart problems and sores on mouth and tongue. People strongly influenced by the Fire element may be vulnerable in very hot weather and usually are calmed down by walking. The bitter flavour favors the Fire Qi.

Someone with well developed Earth energy is well grounded, nurturing, compassionate person, sometimes perceived as the archtypical “earth mother”. Earth people like to bring others together and make good mediators or peacemakers and reliable friends. When people have weak Earth Qi, they can be worriers, prone to pensiveness and overwork. They are vulnerable to digestive problems and they may gain weight easily and lose it with difficulty. Their bodies have a tendency also to make excessive mucus. Those with weak Earth Qi often feel better when they limit cold, raw foods and dairy products. They usually crave sweet, but they should eat warming foods and grains to stay well grounded. Common illnesses include: fatigue, diarrhea, gas and bloating, food allergies and sensitivities, eating disorders, heartburn and canker sores.

A person with well balanced Metal energy is well organized, self disciplines and conscientious. They like structure and rules in their life. A person with Metal Qi imbalance may be grief-stricken, sad, overly critical, having trouble in letting go. When the Metal energy is weak, there can be diseases of the lungd and skin. This energy peaks in the fall. In the cool, crisp, clean air of the autumn, metal people feel they can accomplish anything. The color of Metal is white, and thats is why people strongly influenced by the Metal Qi usually look pale.

When the Water Qi is strong, a person is fearless, determined and can endure many hardships in following their dreams and goals. Longevity is also considered to be associated with healthy Kidney Qi. When it is weak, there can be problems with water metabolism, such as urination, fertility or sexuality. This type of person could be anxious, fearful and withdrawn, and in more severe cases phobic. There may be also diminished hearing or ringing in the ears. The Kidney Qi rules in the winter.